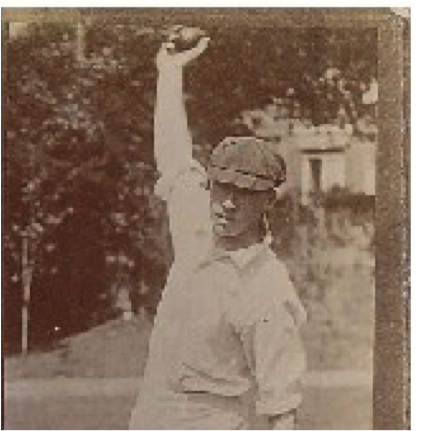 Francis Bernard Roberts, born in India in 1882 was the son of the Reverend Wilson Roberts. Wilson Roberts was a minister with the Church Missionary Society in India so with his parents spending most of their time in that country, Roberts was sent back to England to be educated at Magdalen College School Oxford, and Rossall School where he was in the Cricket XI from 1898 to 1900. He was the leading wicket taker in his last three years during which time he either topped or came second in the batting averages, Two years at Jesus College Cambridge in 1903 and 1904 reading Classics saw him win his blue for cricket in both years along with a blue for hockey.

After leaving Cambridge a teaching appointment at Wellington College meant that he was only available to play county cricket during the summer holidays. With his parents now home from India and living just outside Gloucester and a younger brother Edward being the vicar of Cam near Dursley, he became a regular member of the County eleven from the end of July each year from 1906 onwards. Of his debut against Middlesex, the Gloucester Citizen said of him that “Few amateur bowlers who have been tried for Gloucestershire of late years have performed better upon their initial appearance” and the Bristol Times and Mirror that “he did enough to show that he is worthy of a good trial” Most end of season and pre-season press reports mention how well he had played or how much he would be missed for the early part of the season. His batting, whilst never outstanding was good – in modern parlance he would probably be described as a batsman who bowled a bit – and included five centuries. His second century, 129 in the second innings against Surrey at Bristol in 1909, following 88 in the first innings, came in the only match in which he captained the side. He had taken over from his brother Arthur, who, in turn, had taken over from the injured Gilbert Jessop. Of his 138 against Worcester at Cheltenham in 1911, the Cheltenham Looker On reported that he had “out Jessoped Jessop … his was a cheerful innings and greatly pleased the crowd” Possibly here was an amateur with prospects of a good career ahead of him.

Joining the Rifle Brigade in December 1914 he landed with them in France the following year. Early in 1916 the Germans launched a number of attacks around Ypres designed to distract the Allies from the build-up of forces in front of Verdun where they would launch an offensive at the end of February “aimed at bleeding France white.” In one of those distraction attacks on 8 February, Roberts was shot dead.

This website uses cookies to improve your experience while you navigate through the website. Out of these cookies, the cookies that are categorized as necessary are stored on your browser as they are essential for the working of basic functionalities of the website. We also use third-party cookies that help us analyze and understand how you use this website. These cookies will be stored in your browser only with your consent. You also have the option to opt-out of these cookies. But opting out of some of these cookies may have an effect on your browsing experience.
Necessary Always Enabled
Necessary cookies are absolutely essential for the website to function properly. This category only includes cookies that ensures basic functionalities and security features of the website. These cookies do not store any personal information.
Non-necessary
Any cookies that may not be particularly necessary for the website to function and is used specifically to collect user personal data via analytics, ads, other embedded contents are termed as non-necessary cookies. It is mandatory to procure user consent prior to running these cookies on your website.
SAVE & ACCEPT