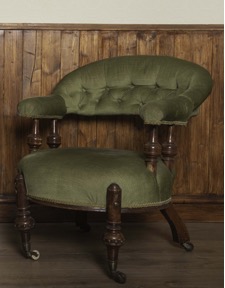 This chair was given to the Gloucestershire County Cricket Club Museum by Ellen Hill of Broomsgreen, Gloucestershire. Ellen’s title to it came from Harriet Fowler.

Susanna Harriet Fowler (known as Harriet) was the daughter of Edward Fowler, the blacksmith at Munsley in Herefordshire and was born there in 1845. After some earlier positions she joined the household of W.G. Grace and worked for the family for a considerable period. It is believed that she helped with the young children and then remained as cook-housekeeper. She is recorded on the 1881 and 1891 Census records in the Grace household. It is not clear whether she moved to London with the family when they moved there in about 1898, but she is back in Munsley in 1901 according to the 1901 Census. It is possible that she retired when the family moved.

When Harriet retired she was “given” the chair, which it was believed had been used by WG until he started to put on too much weight. In fact it is likely that the chair had become part of the furniture of her room in the Grace house and that she was allowed to take some of the furniture away when she retired. That was not an uncommon practice at the time. The chair was therefore now taken to the cottage at Wallers Green, Munsley where Harriet moved in with one of her sisters.

When Harriet died in 1912, the chair passed to her daughter, Frances Emily who married William Medlicot a few years later and was then known as Emily Medlicot. Emily and her husband lived at Withington near Hereford. After she was widowed and found herself caring for an aging Uncle, one of her nieces, Elizabeth (Lizzie) Hill moved in to help look after them.

When Emily Medlicot died in 1938 Lizzie, who had married William Watkins and had a child by that time, inherited Emily’s possessions and remained in the house whilst her family grew. During this time she found the chair surplus to her needs and passed it to her mother Ellen Hill in Broomsgreen Gloucestershire for safe keeping.

Later, Ellen lent the chair to her sister Elizabeth Hill who lived a couple of miles away in Bromsberrow Heath. The chair remained there for some years, still being pointed out to visitors as the “W.G. Grace Chair”. On Elizabeth Hill’s death in 1956 there was a family row about who should have the chair. Ellen continued to believe that she had only lent it to Elizabeth and managed to get hold of it and remove it to her house in Broomsgreen.

Ellen herself died only a year later in 1957 and one of her daughters, Peggy Carless decided that the chair would be safer in a museum. She therefore asked local historian, Lestor Steynor to arrange it. He eventually placed it with the Gloucestershire County Cricket Club museum in Bristol.   Before he passed it on, it is believed that he had had the original dark fabric cover replaced with its current green one.

This picture has appeared in many sources. It was labelled as the Grace Family attending one of their “picnic-cum-nutting party”.

The picnic took place in the summer of 1891 at the village of Yate, near Bristol

Harriet Fowler, dressed in black is standing at the right-hand end of the back row looking at her daughter, Emily

This website uses cookies to improve your experience while you navigate through the website. Out of these cookies, the cookies that are categorized as necessary are stored on your browser as they are essential for the working of basic functionalities of the website. We also use third-party cookies that help us analyze and understand how you use this website. These cookies will be stored in your browser only with your consent. You also have the option to opt-out of these cookies. But opting out of some of these cookies may have an effect on your browsing experience.
Necessary Always Enabled
Necessary cookies are absolutely essential for the website to function properly. This category only includes cookies that ensures basic functionalities and security features of the website. These cookies do not store any personal information.
Non-necessary
Any cookies that may not be particularly necessary for the website to function and is used specifically to collect user personal data via analytics, ads, other embedded contents are termed as non-necessary cookies. It is mandatory to procure user consent prior to running these cookies on your website.
SAVE & ACCEPT